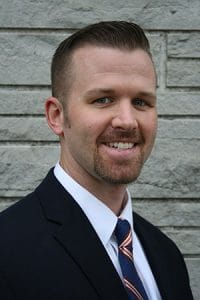 Michael C. Mudd joined the bank permanently in 2012 after a short internship with the bank. He started as an Ag Loan Officer and Vice-President and is now President and CEO of the bank. Michael received a Bachelor’s degree from Missouri Southern State University in Business Administration in 2012. He was born and raised in Silex. His family includes his parents, Terry and Sharon Mudd and his younger sister, Jeni. He married Jackey Branham in 2017 and they welcomed their first child, Weston, in February of 2019. Michael enjoys hunting, farming, playing cards and attending sports events. He is very involved in the community as a member and officer of the Lincoln/Pike County Missouri Cattlemen’s Association, Career Advisory Committee Member for Silex High School, Silex Booster Club Member, and a member of the St. Alphonsus Parish and Millwood Knights of Columbus.

Michael tells us his thoughts on the Silex Banking Company. “It’s the people that work here and how much they care. Our staff is mostly community members who are invested in the growth and success of our customers. Our bank places so much value on the business that comes through the door, and the service is individualized and personable. We service all the bank’s business in house. The investment by the staff into our customers and our community is what makes Silex Banking Company a great bank.”