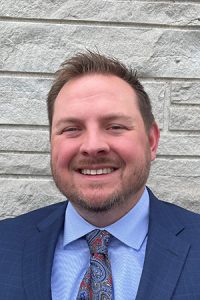 Tory Teasley began working for Silex Banking Company in  March, 2021 as a loan officer. Tory grew up on his family’s farm where they raised cattle and row crops. His family was an integral part in bringing the FFA back to Elsberry in 1998. He showed Angus steers in both FFA and 4-H from the age of 8 until he graduated high school in 2004. During high school he was an active member of the Elsberry FFA Chapter holding the offices of Vice President, Sentinel, and Reporter and was on the Soils, Dairy, Entomology, and Livestock judging teams. In 2004 he received his FFA State Degree at the FFA State Convention in Columbia, Missouri. In college his internship was with Ozark MFA, working with mostly cattle producers in Southwest Missouri. He holds a BS in Agriculture Business with an emphasis in Marketing and Sales from Missouri State University in Springfield, Missouri.

When Tory thinks of the Silex Banking Co., he says: “We offer the solutions of a lot of the bigger banks with loan products that are tailored to our customer’s needs. Our staff prides themselves on knowing every customer by their first name and having a clear understanding of what their financial goals are.”